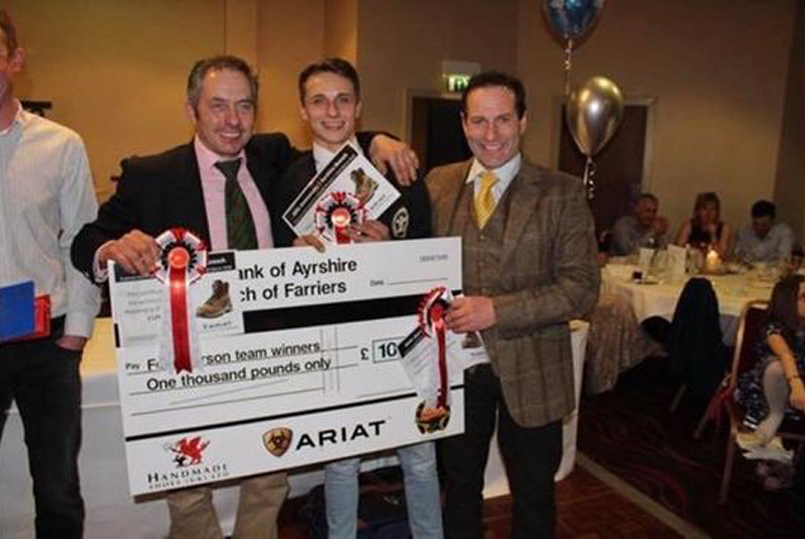 We are very luck to have Cornbury Festival on our doorstep and this year we enjoyed a meal prepared and served by the Hairy Bikers!
A great day out and delicious food, and finished off with a bit of live music.
Brilliant!

Once every 5 weeks Andy takes a quick trip over to Holland to shoe a client’s horses. All the horses are used for dressage, they are based in the UK but have returned home for a few months and will return at the end of the year.

In June Andy had an open day for his fairly new business as a fully licenced racehorse trainer. The racing yard is situated on the same site as his forge.
A small yard of 8 stables designed for NH racing. Andy gained his full public trainers licence in November 2017.
He has always trained his own horses as a permit holder but he would now like to train owners/syndicate horses.
Having the forge on site and Andy’s vast experience in all types of shoeing this facility is a great asset to those racehorses with problamatic feet.
Andy will be shoeing everyday as normal and will run the racing business alongside his farriery business.

Here at Yew Tree Barn we have for the last 27 years bred thoroughbred horses and trained them to race. This is the latest edition by Schaperelli, a bay colt, he has a full brother called Teddy so we thought Bear was a good name for this one!

NH season coming to an end, we shoe for Kim Bailey who has had a succesful season with his racehorses and the majority are now having shoes off and trim for holiday and field turn out before coming back into work in July.

Whilst judging at the Ayrshire Shoeing Competition I took part in the 4 Man Team Shoeing competition.
Really great to be out competing again and working with 3 top farriers…. Nigel Brown, Billy Crothers and Ryan MacDonald.
A nail biting wait to see if we had come anywhere as the results were read out in reverse order.
Awesome to be back at the top with a win in the team shoeing.
Well done guys a brilliant end to a fantastic weekend of shoeing and judging.

I was asked to be one of the judges at the Ayrshire Shoeing Competition this year.
A fantastic event celebrating it’s 40th anniversary, with over 80 farriers and apprentices from all over the country which also included oversea farriers.
A great weekend, very tiring but well worth it.
Whilst judging I decided to take part in the 4 Man Team Shoeing, competing against 12 other teams.
Photos of the shoes I made were for the 3rd and 4th year Apprentice classes, Open shoemaking class and the Draft shoemaking class.

I was asked to be one of the judges at the Ayrshire Shoeing Competition this year.
A fantastic event celebrating it’s 40th anniversary, with over 80 farriers and apprentices from all over the country which also included oversea farriers.
A great weekend, very tiring but well worth it.
Whilst judging I decided to take part in the 4 Man Team Shoeing, competing against 12 other teams.
Photos of the shoes I made were for the 3rd and 4th year Apprentice classes, Open shoemaking class and the Draft shoemaking class.

For the last 18 months I have been using copper nails on horses that tend to have brittle, cracked feet and suffer from bacterial hoof problems causing the hoof to crumble.

Horses that displayed bacteria around the nail holes from steel nails showed an improvement of the hoof wall when shod with copper nails.

Both nails have their place and the condition of the hoof will determine what type of nail to use.

Here is a list of previous apprentices Andy has successfully trained:

Spider shoe made and fitted to a thoroughbred to help with arthritic changes within the foot.

Hard work, dedication and lots of practising for my 4th year apprentice Jim Bendon in the forge in preperation for his forthcoming final exams for his diploma.

Good luck Jim I know you will do really well.

Thanks to Allen at NWT Horshoes for organising a clinic with Danny Elliot at the forge on Saturday. A good turn out of farriers and informative day looking at foot balance and shoeing applications.

Visit from the American farrier team stopped in to have a last team practice before the International Shoeing Competition held at Stoneleigh.

All talented lads that all worked really hard to turn out some nice work. Well done lads and good luck for the competition.

Mustad are hosting a clinic at my forge with Danny Elliot.
I’m affraid this clinic if for farriers only All farriers wishing to come along please contact Alan at NWT Horseshoes
07590427303

Andy and his team have been shoeing Kim Bailey’s racehorses over the last few months as they come in from their holidays to start their triaing for the coming race season.
Our little bunch or racehorses have not long come in, shoes fitted and scruffy manes and tales all tidy.
Good luck to Fitz Volonte… a homebred racehorse that has been so much fun for us is now going to be a school master for the coming point to point season for a jockey based at Kim Baileys.

Moreton In Marsh Show just gets bigger and better every year. Lots to see and do and just a great day out.
The shoeing competition was extremely well organised by fellow farrier Phil Martin (no relation!), who puts in relentless free time to organise and set up this competition.
Some really good work carried out by all the farriers that competed. Great to catch up with everyone and to check out any new ideas.

Congratulation to one of our team members on their recent marriage. Ono treats our horses backs and helps ride out when she gets a spare 5 minutes. A beautiful wedding and beautiful couple. Well done the now Mrs Hemmings!

Practising will start soon for the Moreton In Marsh shoeing competition held in September.
All at the forge are having a go! So hammers and tongs at the ready!
Lovely local show, link attached.

August 2017 Shoeing at our Forge
Local client visiting the forge for a set of shoes.
Horse shod by my son James Martin. (Qualified Farrier Dipwcf).
Hand made shoes fitted and finished off with Kevin Bacons hoof dressing.

August 2017 Eventer shod at the Forge

Eventer – Keatinge Indie shod by our 4th year apprentice Jim Bendon.
Set of shoes fitted with studs all round and Kevin Bacons applied to her hooves.
Nice Job.

TOUR DE FARRIER 2017
Thanks to all the support I have received towards doing this challenge.
The estimated total raised by all those who took part so far is at £15,000 and rising.
An amazing bunch of people rode the 230 miles and the volunteers that all offered to help organise and run the 3 days were superb.
Well done everyone and thanks again.

Andy has been in training now for sometime for the 230 mile cycle over 3 days to raise money for the charity – The Farriers Foundation.
He is currently cycling between 10 and 20 miles a day and has decided to make the hill work that bit easier – he has swapped his Halfords bike for a speedier model! Which he is showing off in the picture! Please help Andy raise as much money as possible and any donations received are very much appreciated.
Regular updates will be posted soon.

July 2017
Jim Bendon our 4th year apprentice is attending college this month in preparation for his final exams.
He has shared some photos of the shoeing he has done at college and a good job he has done to!
Well done Jim.

FUNDRAISING FOR THE FARRIERS FOUNDATION 2017

Andy is in training!
In 2015 Andy help raise money for The Farriers Foundation and Macmillan Cancer Support, by cycling with 40 other farriers 180 miles in 3 days from West to East coast in Yorkshire.
In August 2017 Andy will be cycling again for this good cause with 50 farriers covering 230 miles over the Welsh hills near Aberystwyth.
Andy would really appreciate your support and has created a – Just giving page were you can sponsor Andy online. He will be giving regular updates of his training and coverage of the gruelling 3 day bike ride so you can keep up-to-date on his progress.
Please follow:

Andy has just returned from shoeing out in Holland.
A client of Andy’s based in the UK needed a farrier when they returned with their dressage horses back to Holland. Andy agreed to shoe them once they were settled in and made his first trip this month. All went well and he will share these trips with his son James.

Lovely to receive a thank you letter from The Welsh Farrier & Blacksmiths Association for judging at the spring fayre.

Andy judging at the Royal Welsh Spring Fayre with John Benfield (a former apprentice of Andy’s).
Both judges were impressed with the high standard of shoeing from both farriers and apprentices.

These shoes were hand made by Andy for competitors to make in the Royal Welsh Spring Fayre shoeing competition.

Fitz Volonte 10 year old TB homebred and trained by Andy ran at Aintree at the begging of April, his son James rode him but pulled him up 3 from home. Not disappointed as it was his first time over the grand national fences and no one was sure how he would take to them.
He then ran 10 days later at Stratford and won by 30 lengths! He pinged the fences and galloped everything in to the ground.
Next race if all goes well is back to Stratford in June.

Andy won in 2011 the world horseshoeing draft horse class, the trophy was presented by a farrier who made the shoe and fitted it to a wooden hoof of a heavy horses foot, really cool trophy to win!